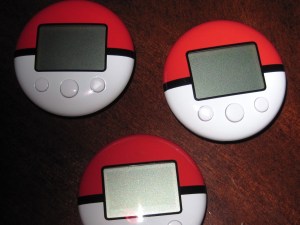 I bought my son a Pokémon soul silver Nintendo DS game in June…I think.  It came with this pokéwalker thing, it links to the game and  you wear it like a pedometer.  It measures you steps and also plays with the computer game.

One day, I washed clothes and I found the pokéwalker in the washer, all wet.  It was in a pocket that I forgot to check.  It stopped working.  We went all over town and finally found a battery for it.  The directions said to let the thing fully dry and they try to start it back up.  I went to Game Stop to buy another pokéwalker.  They didn’t sell them, but the guy found one that someone had gave him, so he gave it to me, didn’t charge me for it.  I brought it home and my son tried to play it with his game, but it would not work.  Once it is linked to a game, it won’t work with another game.  He was very upset.  I found them on-line but they were $11 plus shipping.

Today we were out at Sam’s Club and I saw the Pokémon game Heartgold.  It also has a pokéwalker so I bought it.  I gave it to my son and he was all excited that he got a new game and a pokéwalker.  Now he was in a dilemma as to what game he wanted to link the pokéwalker to.  I guess the more you play the more it will do and he has played a lot on the silver game he has.  You can also play with it against other pokéwalkers, like kids at school.  Who knew!  He wanted me to buy another pokéwalker to link to his silver game because they will only link to one, and the silver one is more powerful than the gold one.

“Geesh” I thought.  I looked online and called Nintendo customer service.  I told them that I washed the pokéwalker, dried it out, got a new battery and it didn’t work.  They said I have to buy a new one, it would be $8.95 plus tax and shipping.  When I got it I could link it to the game, I had to call them to do it.  I said “Can I link another one that I have that someone gave me?”  She said I could.  So I put my son on the phone and she told him how to link the game by resetting the used one he had to his game.  You have to push a lot of buttons, but she was telling him step by step how to do it.  It worked.  It linked to his game.  “YEAH!”  Now I don’t have to buy another one.  He said now that he has two, that they can battles against each other, give each other game gifts.

He also said that both games are just alike, except they have different characters, but play just alike.
I just thought I would pass this info along, in case people were wondering if that could be possible to link a different pokéwalker to their game.

3 thoughts on “Pokéwalkers can be reset.”