It rained for the past two days here in Phoenix, Arizona.  Right now it is just after midnight and it is 38 degrees.  I am too lazy to look up the symbol for degrees…but it is bugging me I will go look it up.  OK it is 38º F.  (It is alt 167 press the alt and number pad at the same time.)  ☺ 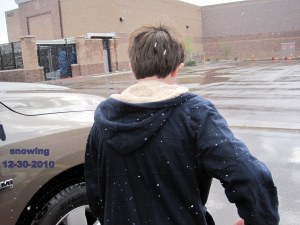 It snowed today, several times.  Lots of little flurries flying through the sky.  It was really windy too.  It didn’t stick to the ground though.  The mountains were all covered in white at the top.  (click pictures to view bigger if you want to.)

The road, Hwy I17 to Flagstaff was closed last night.  It was really pouring down rain and thundering and lightening all night here.  I woke up with a headache.  When it rains bad, I have a headache.  My ear was also hurting.  I could not hear real well.  It felt like there was fluid behind my eardrum.  Probably from the air pressure outside.  I would hold my nose and blow to try to pop my ear, but it didn’t work.  It was awful.  It was like I was under water trying to hear things.  I took two Sudafed tablets and it didn’t help.  I finally took a hot shower and just let the hot water run over my head and I could finally pop my ears.  I took two more Sudafed tablets and it made it better.  I can now hear.  The fluid must have drained.  I think it has stopped raining and snowing and the pressure must be better because I do feel better now.  I like watching it snow, even if it was a fleeting glimpse.

One thought on “Snow in Arizona….yes it did”