It is that time to have weekend coffee share.

Lets get some coffee made.

I also have Shasta cola, (I like it better than Coke), root beer, hot cocoa. Now I have to tell you about some of the stuff I have been doing. It looks like Sirius did cancel my service like I asked them to. It seemed like they didn’t want to do it but they did. FM radio is just fine for me. I can also plug in a flash drive and play the music I like. I discovered a neat feature on my car radio. It will find a song on the flash drive. I have this flash drive that I have been putting songs on. I plugged it in and the thing has 440 songs. Wow, I didn’t know it has that many songs. It is mostly all of my son’s songs. He buys albums on Amazon with 30 songs on it. I save them after they get put on his MP3 player.

I saw an article about the 10 worse dog foods made. I buy Iams prolife for my dog. It is $10 for a 7 pound bag. I just bought a bag of it yesterday. I read the list of the worst 10 dog foods and there it was at number 5, on the list. “OH NO!” The first ingredient is chicken, but the second ingredient is corn. I guess that is bad for dogs. I returned the Iams dog food to the store and bought a new dog food that is on the good list. Wait I just asked if what I bought on another web site and it said what I bought is not good for dogs either. Now I am confused. I opened the bag and my dog will eat it until it is gone. It was on a good list and one other web site says it is not good. Darn.

I am knitting a new hat. I finished the red one that I made for my husband. That was real fun. (NOT). The yarn was so thick. I knitted the entire hat. Hubby tried it on and it was too big. Big and so heavy.

I unraveled the hat and made a smaller size hat. I gave it to him, it is not too big but the yarn is so thick and heavy. I told him his head will be really warm in a blizzard, possibly in Alaska or even the North Pole.

I am now knitting me a hot This is half done. I will finish it with the gold yarn. I have one more row before I change colors. 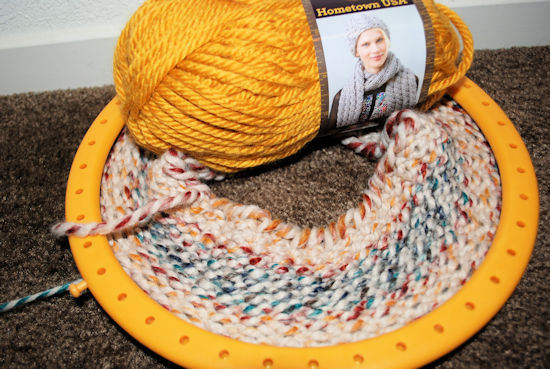 Well I have to go shrink wrap a lot of chicken breasts I bought. I will talk about that next week. Have a great day.

The Weekend Coffee Share is hosted by Part Time Monster.  You can join this week’s Coffee Share on her blog or by clicking on the “Linkup Linky“.