The other day we went to the grocery store. My husband saw something on TV and made me come upstairs to see it. Uggggh. I hate climbing the stairs to see what he is watching on TV. I went up there and he said “Sit down and watch this”. I sat down and it was  about some guy serving meatballs in his restaurant. His customers were raving about how great they tasted. The guy said he takes ground beef and mixes them with some type of special bread crumbs and eggs and sugar, salt and pepper. Then he forms meatballs and deep fries them. Then he makes a brown gravy and puts the meatballs in the gravy and bakes them for 3 hours. Well I am not deep frying meatballs but I could make them and cook them but not in the oven for 3 hours. I looked up a Swiss meatball recipe with gravy. I decided to make them. We went to the store so I could get some meat and then I found the isle with egg noodles. I went down the isle when some man who was looking at something on the other side jumped in front of me and said “I was here first!”  I didn’t even know what he was talking about. I was just walking by and the noodles were down the isle on the other. I guess he thought I was supposed to not walk by him or something. I didn’t say anything to him.

I did make the meatballs and they tasted really good. The next time I make them I will take pictures and post the recipe.

It snowed last night and today. It was really pretty last night. The snow was so bright so I took a picture. First snow this year. 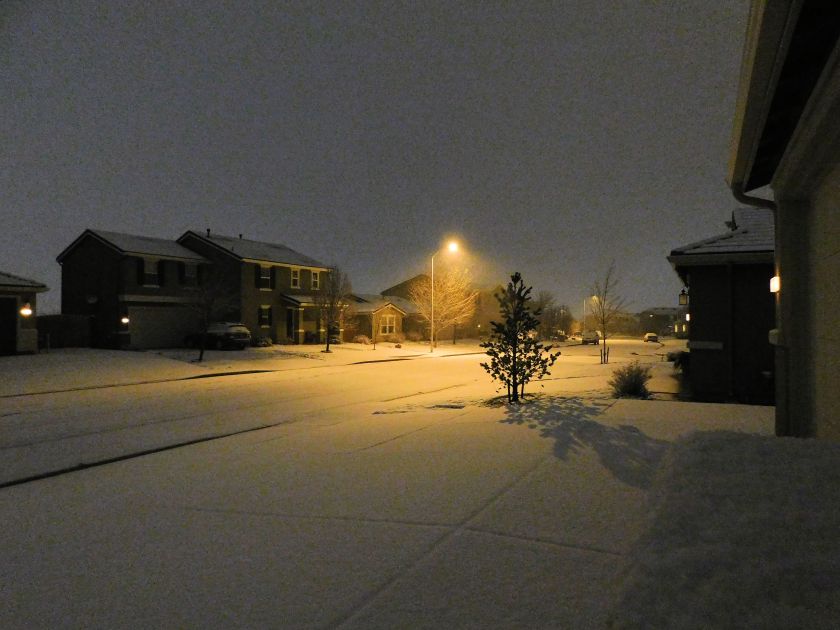 9 thoughts on “I was here first he said.”