The weekly photo challenge is Motion.

The ocean is always in motion. The waves roll in. I love watching the waves. 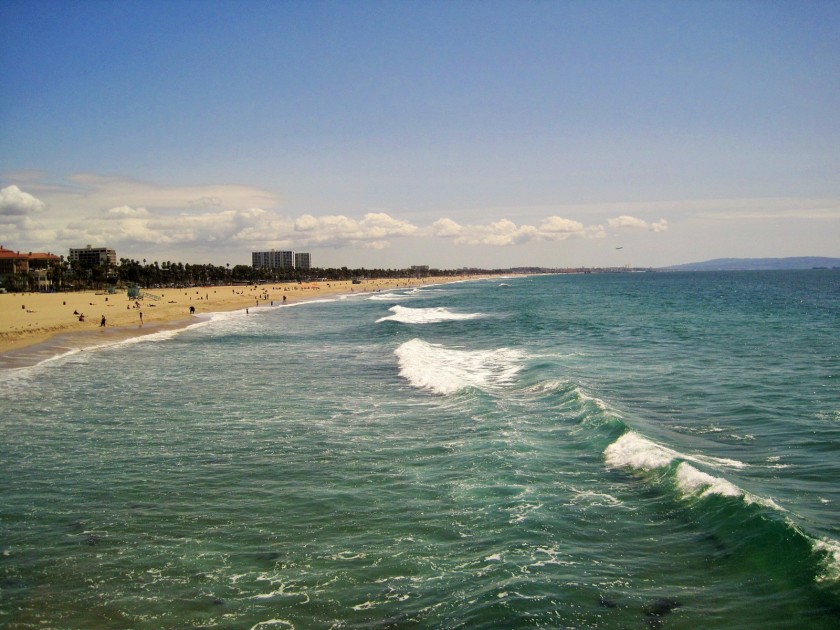 This is by the Santa Monica Pier in California.

I went to the dentist in my town and he gave me a list of what I needed done. Two root canals and crowns that would cost me $4,400.00. I started looking at prices in Tijuana and found a couple of travel blogs that recommended Baja Oral Center in Tijuana, Mexico. I made an appointment for July 7th. We drove to San Diego and stayed by the ocean in an RV park called Campland on the Bay. That place is expensive and crowded and packed. They crowd you in close together and the place is just dirt with a fire pit and picnic table with full hookups for $100 a night and up. But it was a place to stay and I wanted to go to the beach. 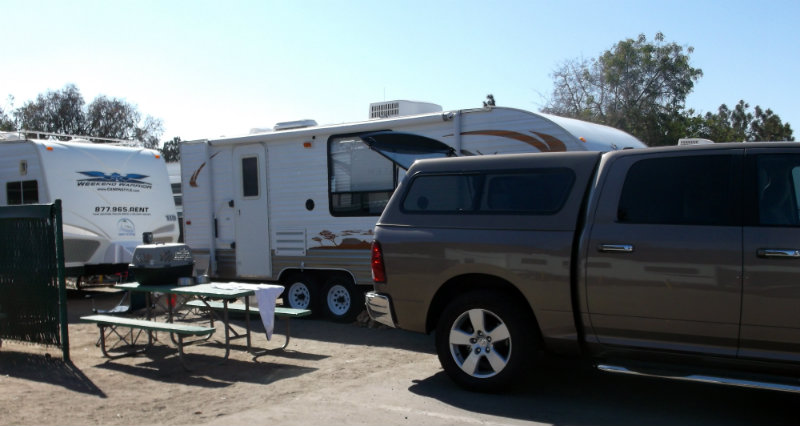 I do not go to the dentist because I am kind of afraid of going. My front tooth broke 4 years ago and it was getting shorter so I had to finally go. My husband made an appointment too. We drove to the border and parked on the USA side and walked over to Mexico. We walked to the taxi area and I gave the driver a printout of the directions to the dentist. We got there fast. They drive crazy in Mexico. It was not bad going to the dentist, it was frightful driving back to the border. There are roundabouts and everyone goes at the same time. We found the dentist office and went in. It was so hot. I was the first appointment and I guess they turn off the air conditioner on Sunday. We were hot and sweating. The dentist called me in and took a look at my teeth. He said he would bond my front tooth, it didn’t need a root canal and I needed a root canal on one of my back teeth. He would do it for $850. My dentist wanted $2,400 for that tooth. I said OK and waited to go to another office down the hall to do the root canal. That cost $300, but the crown would be $550, it would be porcelain. It was a woman dentist and it seemed like it took forever, I guess it was a couple of hours. I then went back to Dr. Garcia and he worked on my tooth getting it ready for the crown. I would have to come back on Wednesday for the crown. We got a taxi and went to Revolution street. My son wanted a big Mexican hat. 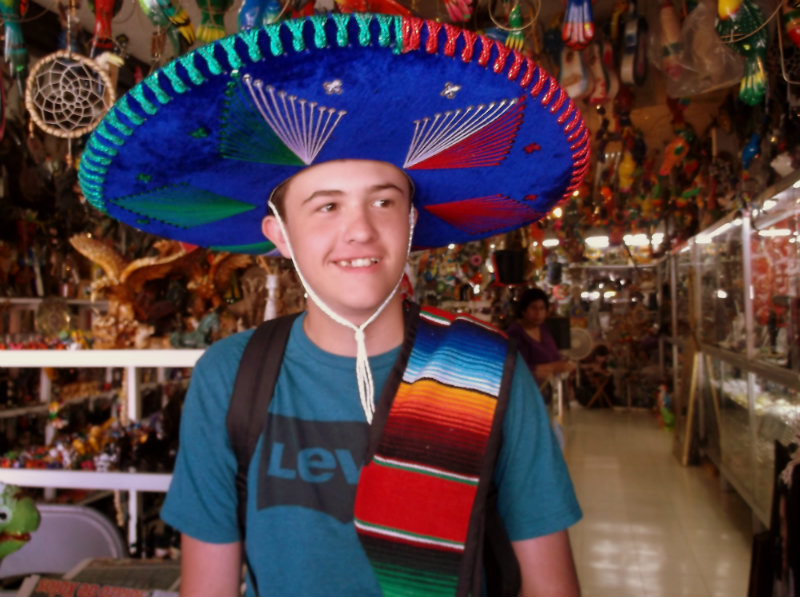 His is black but just like this. It was like a velvet with Mexico written on it with colored strings all around the brim. He paid $35 for it. I got two bottles of tequila, you are allowed to bring back a liter per person back across the border. We got a taxi and went to the border to wait in line. It was hot and the line was so long. It was hardly moving and we stood there for 5 hours. It was just awful. I was hot and my back hurt and my feet hurt and my mouth was now hurting. While you stand there in line, there are people begging for money. Vagrant people was singing really loud in your face holding cans, shaking them at you to give them money. One guy was sitting at a keyboard, singing really bad. There was a guy on the side-walk that looked like he was dead. Cops were standing by him, lifting up his shirt to see if he was shot or stabbed I guess. They would kick him and we finally saw him breathing but he never opened his eyes. The line finally moved past him. I was so glad to finally get through the line and back into the U.S. I dreaded going back on Wednesday because I didn’t want to wait in that line again.
We went to a beach on Tuesday that we found that allowed dogs. The ocean is so beautiful. I love the waves and walking in the sand. My dog hated the ocean, the waves would come up the sand and she would freak out. A few waves came in and drenched me while I was walking along the beach. My dog got wet too.
Wednesday came and we had an appointment to go back to the dentist. My son stayed in the RV. He didn’t want to go back to Mexico. I got my crown and the doctor fixed my front tooth that was broke. It only cost $60 and it looks great. He even fixed my top one for free, it was a little chipped so he smoothed it out and bonded the edge. My husband got a bridge for the top teeth for $450. I was so happy to have my teeth fixed. The dentist was very nice. We got in a taxi and went back to the border. There was no line, it took us 15 minutes to wait in line inside the border building. I was so happy that there was no line. Do not go to Mexico on a Monday after a holiday weekend. It was a zoo. It was after the 4th of July. Wednesday was not busy at all. If you do go to Mexico to the dentist, do not go on a Monday. It is hot because they do not cool the building until Monday. It takes a while to cool down. Other than that, I would go back to have my teeth worked on if I need it. There was a lady in there, paying for her dental visit. I talked to her. She was from Texas and said she has been going to Dr. Garcia for years. She had all her teeth veneered. She said it cost her $300 to fly to Tijuana and $80 a night to stay in the hotel in Tijuana. That was less than my RV park space.
We did eat at Old Town in San Diego one night. The food was great. My son was not thrilled with the bay water to swim in. He likes the ocean better, he said the water was cleaner. This is the Campland beach. It was packed with people but the part I took the picture was not crowded. 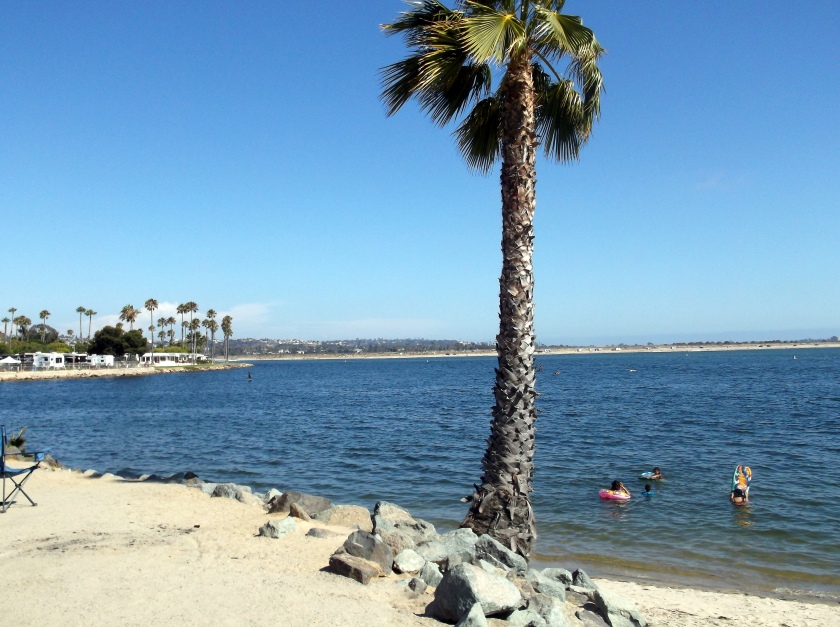