The weekly photo challenge is Landscape.

I love the landscape of Organ Pipe Monument in Arizona. It is a special place where only Organ pipe cactus grows. Here are a couple of pictures of that landscape.

Organ Pipe Cactus National monument is in Arizona. At the bottom of Arizona, near the Mexico border.  There are lots of giant cactus. The one with lots of columnar cactus is the second largest in the U.S. (next to the Saguaro) growing as tall as 23 feet. Instead of having a central stem, however, a cluster of 5 to 20 slender branches grow from a point at ground level and curve gracefully upward.  The long ago settlers said the dead cactus looked like organ pipes, so they called them that. Saguaro cactus also grow here. They are tall cactus that took like they have arms.

I made a print of this cactus picture and hung it on the wall. We stayed in the campground and it was nice. They even paved where you park.

When we first got there, I grabbed my camera and went for a walk to take pictures. I tripped over a big rock and fell down. I scraped my hand and knee pretty good.  When I fell I landed on some rocks. It took a month for the cuts on my knee to heal. I got up and hobbled down the road to take pictures.  I am just lucky I did not fall into cactus thorns.

One cactus there, you never want to touch is this one. 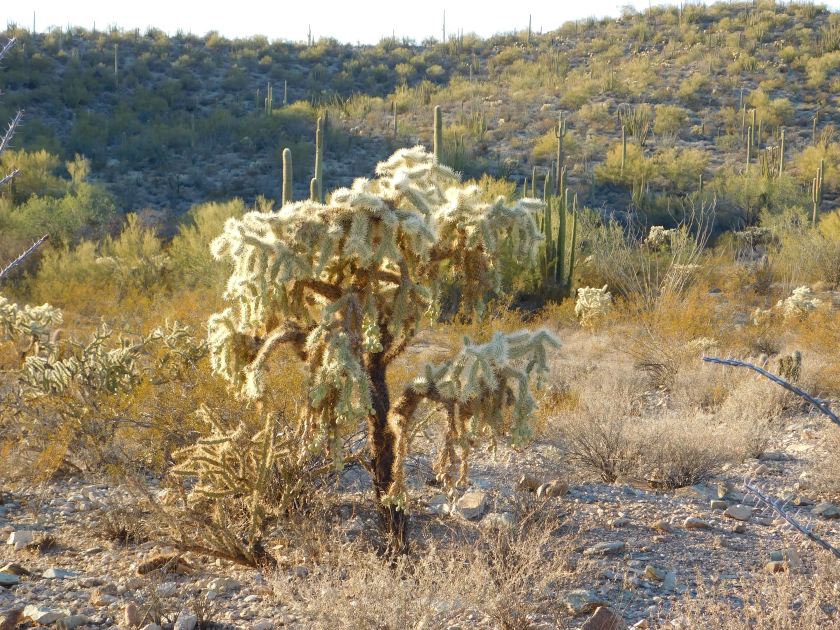 This one will shoot needles into you skin like fish hooks and they are very hard to pull out. My husband once showed me one and said “Never touch this.” He put his hand close to it and it shot the needles into his hand. He had to pull them out and they took chunks of skin with it. He said it hurt really bad. It is called a jumping cholla cactus. They can shoot needles up to 3 feet away.

When you drive to the park and exit, border patrol stops everyone to check for illegal aliens. We asked the border patrol, “When Florida stops you they give you orange juice, what do we get in Arizona?” They said “Harassment by us.” That was a good answer.