The join in go to this blog and find the weekly link.

It is another Weekend coffee share. If we were having coffee I would give you a monster doughnut that my husband bought a box of from this doughnut shop about 3 miles away. Their doughnuts are so big and so good. It is actually too big. I can only eat part of it. Why would they make them so monster size? It is a sugar over load when you eat one. We bought 6 and the girl put 3 more giant ones in a bag and gave it to us. Why? I don’t really know why she did that.

We took our kayak to Boca lake, it is up in the mountains on the way to Truckee, CA. There are 2 reservoirs there, Boca and Stampede, up higher the mountain. The water was really low last year. This year it snowed and rained a lot so the lake looks full. It was so pretty. We drove up right to the water and parked. They have a dirt road by it, it is a day use area.

We bought the orange kayak a year ago and have never used it. The water was so low around here from the drought last year. When we went to TX at Christmas, it was so windy and wavy I was afraid to even try it.

My son got in it first and took to paddling the kayak, really fast. He decided to paddle all the way across the lake and back. 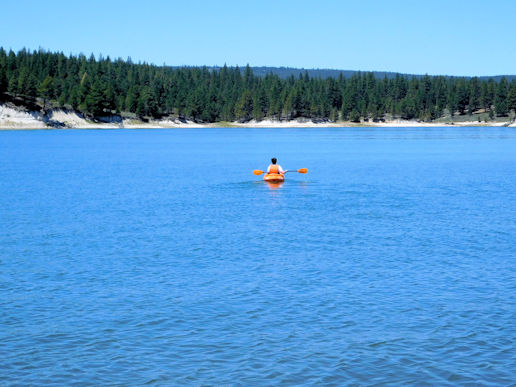 We sat by the car and I made egg salad sandwiches. It was so dry and a little breeze was blowing. It was 90 degrees. The bread dried out as fast as I was spreading on the egg salad. So much for soft bread. It was like eating almost toast bread. Not great.

Pretty soon my son came back. 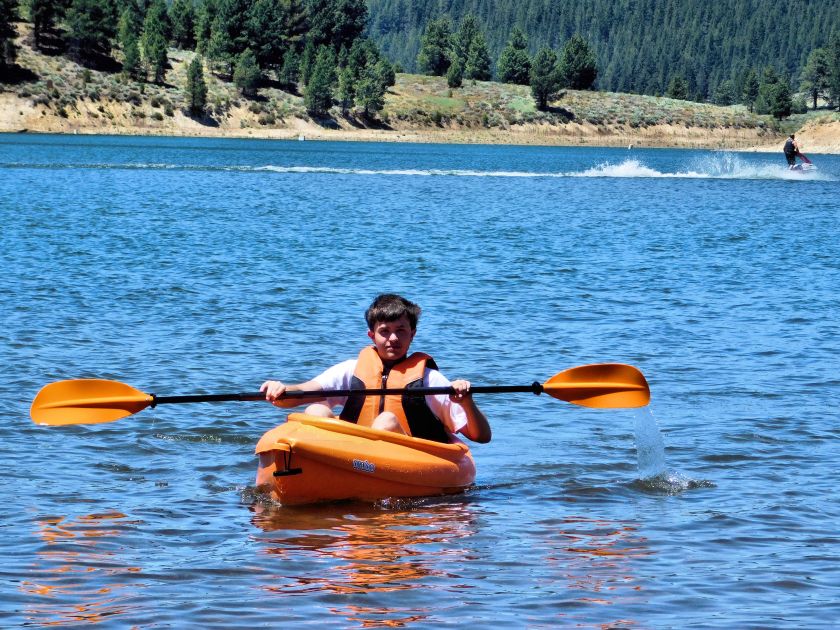 Then my husband tried the kayak. It was wobbling for a while until he got used to keeping it balanced.

I tried it out. It was fun but it was hard for me to get out of. My knees are not that great that I can’t push up off the kayak to stand up. I said I wanted to buy another kayak because my son said it is not fun to paddle around by yourself.

We bought one at Sam’s Club but when we were going out the door I noticed it had a big dent on the side and a cut on it. I was not going to put that in the water so we walked back in and returned it. The only other place they had one like it was at Sam’s Club in Sacramento, Ca. We drove there the next day and bought the red one. It is a sit on kayak and way more stable than the sit in one. Plus if you fall off it would be easier to get back on the sit on one. Here is the red one we bought.

We took it to a little lake at Washoe State park lake. The lake is all dried up but there is a little lake about 3 to 4 feet deep. We put it in the water there and all tried it out. It is very stable and easy to paddle. My son said that he wanted the red one and that he would never used the orange one again. I put the orange kayak on Craigs list and sold it the next morning. I went to Big 5 sporting goods store and bought a yellow one like the red one. It is 8 foot and I love the yellow. I was reading about it and the 8 foot one is flatter and easy to put in the storage on the motorhome. The red one is 8.5 feet. So it would not fit in the motor home. We then took it back to Sam’s Club and went back to Big 5 and bought two more yellow kayaks. One for each of us.  They are flat on the bottom and stand up next to each other. It is easy to get on and off of. Extremely stable and fun to use. I am happy we found them because they are hard to find in the stores right now. Plus Big 5 had a coupon online for 10 percent off, even better. They are Lifetime 8 foot Lotus sit on kayaks. 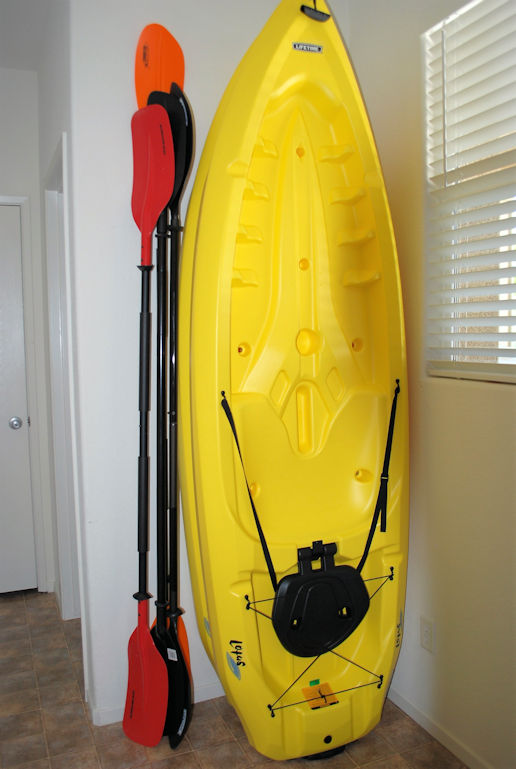 Here is all 3 stacked up, waiting to be used. We will go try them out next week.